2017 proved to be an explosive year for 100G, as well as for other "high-speed" networking technologies ("high-speed" being anything 25G+). According to Crehan Research, the data center Ethernet switching market saw its strongest growth in five years during 2017.

In this report, Crehan notes that,

This statement is not only valid, but can even be considered conservative; 100G adoption rates have been on a steep upward climb from the beginning of 2016 through 2017. 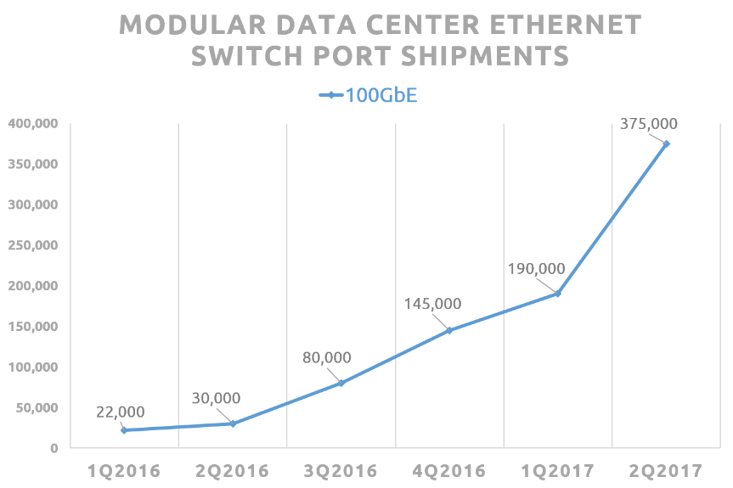 The Dilemma: The 100G Blindspot

There are many reasons the market is experiencing an increase in the adoption of high-speed networking technologies:

Be it 25, 40, 50, or 100G, high-speed networking technologies are undoubtedly on the rise, with powerful drivers pushing for their wide-spread adoption. However, there is one particular networking technology that is not keeping up with the pace of production networks: network monitoring solutions (often referred to as network visibility solutions.)

Even though production networks are experiencing explosive adoption rates for high-speed routing and switching solutions, the same cannot be said for network visibility. The main reason for this is that high-speed offerings all share one thing in common: they are extremely complicated and expensive to monitor. The sheer volume and speed of packets traversing the networks overwhelm most of the monitoring tools available today - originally designed to ingest 1G traffic... 10G at best.

To make a tough problem harder, the vendors providing these monitoring tools have not embraced higher-speed offerings. We still find ourselves in a network monitoring world where the ingest rates for most monitoring tools hit the ceiling at 10G line-rate.

This just isn't going to cut it.

Inspecting and monitoring traffic on high-speed networks is a non-trivial task. The biggest challenge is reconciling the difference between production network speeds and the ingest rates of tools designed to monitor them. Unfortunately, ingest rates are not the only obstacle to monitoring these networks...

High-speed network traffic tends to come with extra baggage: multiple MPLS headers, packets with overlays/underlays/everything in-between, mal-formed packets, large volumes of PITA (Pain In The Ass) packets, etc. Due to these unique characteristics of high-speed networking, network professionals find themselves facing a critical need for a solution that can:

Frame Processors, often referred to as "Next-Generation Packet Brokers" help network engineers bridge the gap between high-speed networks and lower speed 10G network analyzers. Frame Processors provide the visibility and intelligence required for improving the stability, performance, and security of networks. With the Frame Processors, operations and security teams have end-to-end visibility, as well as access and the ability to groom, trim, optimize, and manipulate traffic from test or production network.

Frame Processors come in a variety of form factors and leverage flexible "network interface" options for high-speed networks. For example, our (MantisNet's) flagship Frame Processor, the Reconfigurable Frame Processor Next Generation (RFP-NG) is a (32) port, QSFP28 based 1U appliance that is capable of monitoring 10/25/40/50/100G links at line-rate. The device can ingest multiple high-speed network links and load-balance the traffic across the multiple 10G ports (for FULL-Fidelity visibility monitoring.) The RFP-NG can also apply line-rate filters on 100G traffic to skinny down the total volume and egress only the traffic of interest out of a single 10G port (for TARGETED visibility monitoring.)

*The RFP-NG supports the following use cases:

Very few solutions can help network professionals monitor and manage 100G traffic at line-rate AND filter ANY TYPE OF PACKET found within a 100G network.

That is why MantisNet offers 100G Frame Processor, built around a fully programmable systems architecture and silicon; technology that is optimized for the extreme abstraction of both the control and data planes, resulting in the ability to identify, monitor, and filter ANY TYPE OF PACKET found within a network (including 100G.) Guaranteed.