To better illustrate the changes occurring when moving into cloud-native environments, and the implications for 5G network visibility, let’s take a closer look at one of the most important aspects of a successful 5G network deployment- the Service Based Architecture (SBA) that drives the 5G core control plane.

As defined by the 3GPP, the SBA is

“a system architecture in which the system functionality is achieved by a set of NFs (network functions) providing services to other authorized NFs to access their services”.

As illustrated in the graphic above, there are multiple network functions that co-exist within the SBA, all of which communicate through a common interface- the Service Based Interface (SBI). These functions are used for session management, access authorization, network slicing, subscription management, policy control, and for allowing outside applications to interface with the 5G environment. This is not an exhaustive list of everything these functions accomplish, but it is safe to say that these NFs are essential to the implementation of a 5G network.

Now to pivot back to the topic of cloud-native: these functions are completely software driven and are not bound to proprietary hardware and protocols. The SBA embraces a microservices architecture- NFs are deployed using container technology, where a node (i.e. machine, or “kernel”) can be servicing either a singular function, multiple functions, or perhaps even combining multiple nodes to service a single function.

Regardless of how the nodes are distributed, the main takeaway is that all NFs within the SBA communicate at the “container-to-container” level- allowing for the full benefit of cloud-native flexibility, scale, and performance.

Given that these critical NFs are now communicating at the “container-to-container” level, it is important to note that visibility into communications is a challenge to overcome. If a network operator would like to monitor what is occurring within the SBA, be it for performance delivery or security concerns, they can not utilize traditional network visibility solutions. From network taps, to network packet brokers, all the way to VM-based “cloud” solutions- these approaches simply do not have visibility into container-to-container level communication. This is the visibility gap that many network professionals are facing today. In order to successfully monitor container-level data exchanges within cloud-native environments, you need to leverage a visibility solution that is also cloud-native.

MantisNet’s Containerized Visibility Fabric (CVF) is a cloud-native solution that provides visibility into container level communication. This is possible because the solution leverages visibility agents sitting on the physical machines, or nodes, that are running the virtual NFs- an approach that focuses on “kernel-level” visibility. In doing so, this solution has complete understanding of each node that is spun up, to include all containers (and subsequently, all NFs) running within that node.

All container-to-container traffic is now visible, and available to pipe into analytic solutions or custom analytic pipelines. 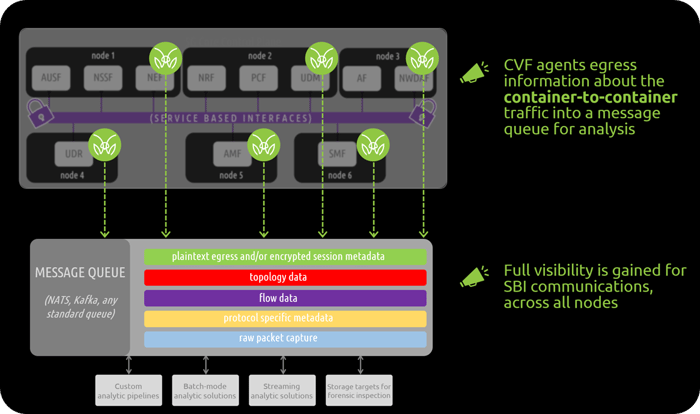 So, if a cloud-native solution is indeed being used to gain visibility, how can it handle encryption? It is widely known, and published in standards, that the SBI utilizes a protocol stack that includes TLS encryption (up to and including TLS 1.3).

If all the traffic is encrypted, does visibility matter much? The answer to this is twofold:

MantisNet’s CVF helps solve tough visibility challenges that are present within 5G environments- or any cloud-native environment for that matter. As more organizations find themselves tasked with the responsibility for monitoring container environments, it is important to consider how this can best be accomplished.

Mike's a leader in developing client solutions for data center infrastructure, cybersecurity, and network visibility. He has worked with commercial telecom providers, the US Intelligence Community, and various other government agencies to help implement data-centric solutions.